Each of the tiny house plans below are based off of or were used in the construction of actual tiny houses of very high quality. The individuals selling these plans live in their tiny homes full-time and are amazing examples for the rest of the tiny house community. Your support for them is appreciated! These plans were all very carefully researched, planned and tested, meaning you can trust that that any finished home created using any of these plans will be safe and efficient, with incredibly well thought-out features and use of space. These plans are for tiny houses with a more modern design style (often a low-slope shed-style roof) and offer a variety of options for singles and couples looking to live tiny in some of the very best designs. I highly recommend each of these (my plans the most, of course!).
How much should you spend on tiny house plans? CLICK HERE for more info. 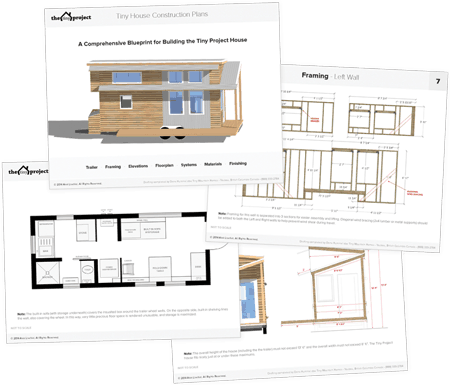 These construction plans offer complete blueprints to build your own tiny house — to the exact same specifications as our original Tiny Project house as seen on this website. The house has been featured in the press worldwide and has even won a design award from Sunset Magazine for best "on wheels" house. Save hundreds of hours and possibly thousands of dollars! The plans include almost 40 pages of:

Get "The Tiny Project" Plans

Check out the Photo Book as a great companion to the plans. 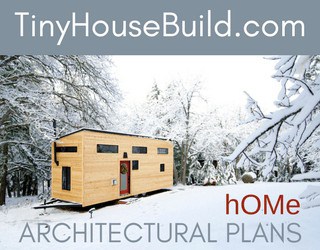 Andrew and Gabriella’s hOMe, a modern tiny house on wheels, offers tiny house living without compromise. The house has a full sized kitchen, a comfortable set of stairs, copious amounts of storage that works double duty as furniture, a functional bathroom with room for a conventionally sized sink, shower and toilet. These tiny house plans provide you with the information to build your own hOMe:

Check out their DVD Building Guide, too! 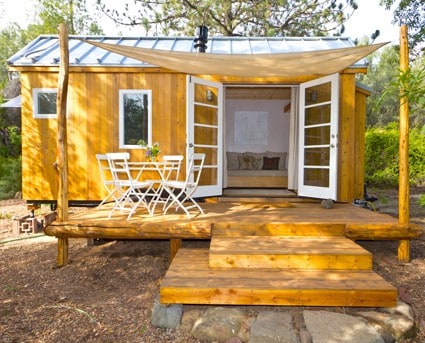 Vina’s Sol Haus Tiny House and Light Haus are two of my all time favourites! She also has plans for a Sol Pod tiny office/studio. Her design aesthetic is more modern, clean and simple. Vina also offers one-on-one consultations and custom architectural design services. Vina’s a bright star in the tiny house world and is working hard to make tiny living possible for countless others! Her plans are professionally compiled as a comprehensive set, consisting of 11×17 sheets including:

See more of Vina’s house Vina has a great photo book too! 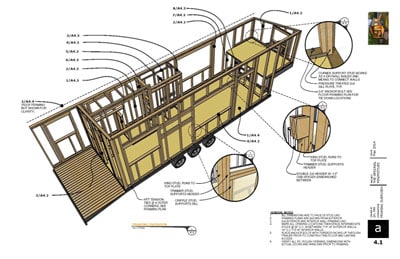 These are the plans for Macy’s very popular MiniMotives house. Like the other plans shown here, her house features a more modern design style. Macy’s is somewhat unique in that it does not include a loft and makes room for a bed on the main level (with storage underneath), accessible with just a few small steps.

Macy’s Basic-Plans package is a 13 page set of drawings with general information (including links to products that may be less familiar and her exact fixtures), a material list for basic costing purposes, some floor and ceiling plans, elevations and framing plans, that’s it.  Simple easy general info without the bells and whistles.  There are no details of specific wall assemblies included in this package.

For those that want it all detailed out down to the millwork, Macy’s Full Plans set has just that.  It’s a 33 page set of drawings that includes everything in the Basic Plan package as well as the electrical plan, plumbing plan, millwork and all the details of assemblies I used in my actual house.  This, I imaging would be the package that I would purchase if I as starting it over again from scratch, in fact I WISH I had had this prior to going at it.

The third package is Everything, the full plans plus the Sketchup model which is fully editable.  This is for those people who want to build something similar to Macy’s house but maybe with a few tweaks.  They can start with the base sketchup model and tweak things from there.  I am only offering the Sketchup Model with the purchase of the full set of plans, not independently.

Macy sells a great eBook too! 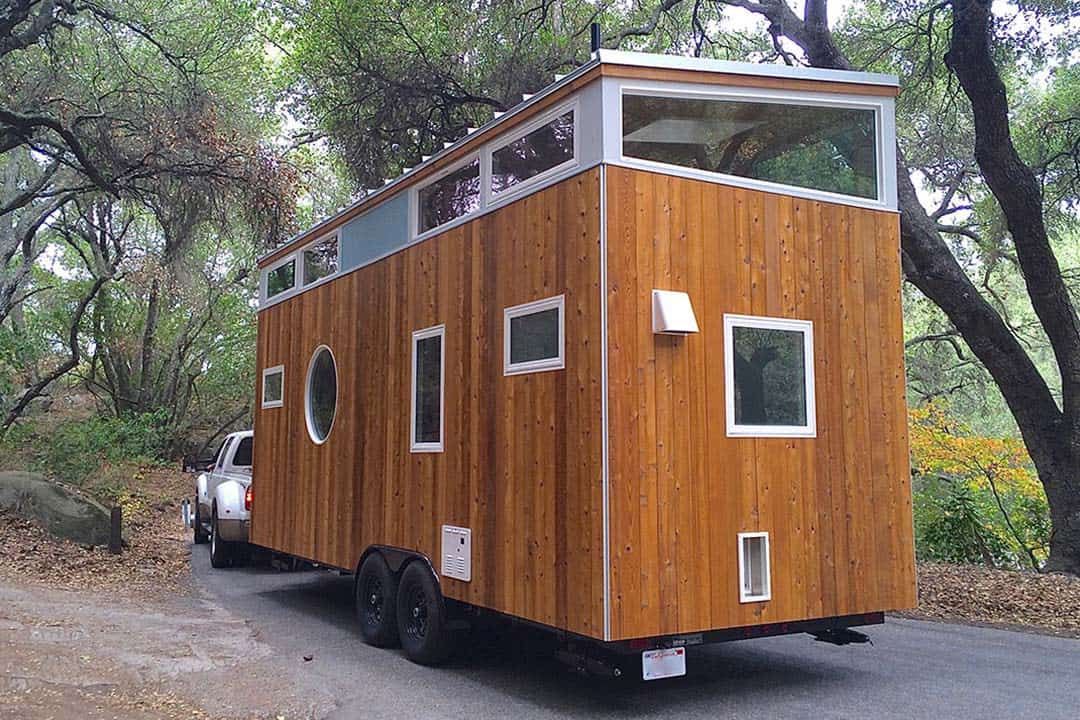 The Light Haus is a fully customized tiny house that was designed for a couple – she is 5’0″ and he is 6’4″ tall. The design provides height clearance of 6’8″ below the loft, and 4’6″ above the loft. At 24′ long, many features have been incorporated: 2 separate office spaces, large and functional kitchen, luxurious bathroom, roomy bedroom loft accessed by innovative stair design, copious amounts of storage, and even a special access door for a cat!

Clerestory windows, an abundance of light, a light interior color pallet, and non-toxic materials, make this home truly feel like a refuge from the outside world. The Light Haus is ideal for a single person, a couple, and would make a beautiful ADU on a city lot and/or nightly rental for AirBnB crowd. 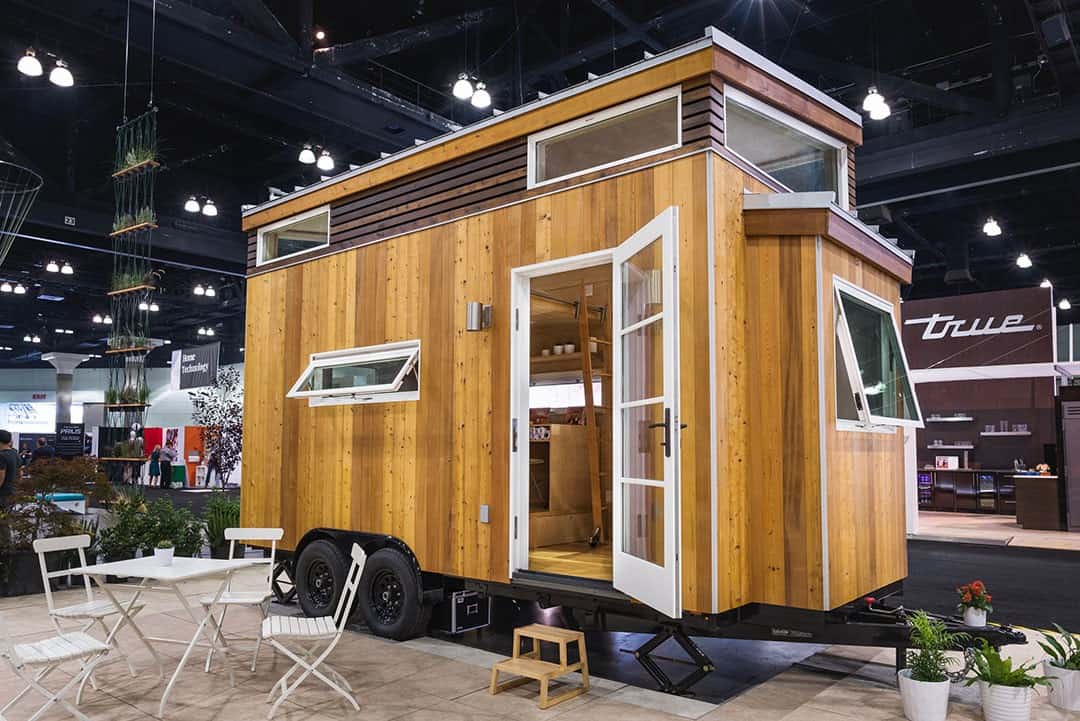 Another beautiful creation of Vina Lustado! After designing her own tiny home and living in it for many years, she decided to design & build a mobile office space, also on a trailer. SOL POD is designed to be multi-functional, flexible and portable. The interior is bathed with natural light and there is plenty of storage on the raised platform floor.

By incorporating green technologies such as solar, this tiny house is a perfect for off-grid applications. It uses an innovative solar battery storage by SimpliPhi Power.

Perhaps the best part of this unit is the ease and speed of construction with SIPs panels (structural insulated panels). The walls and roof went up in literally one day! 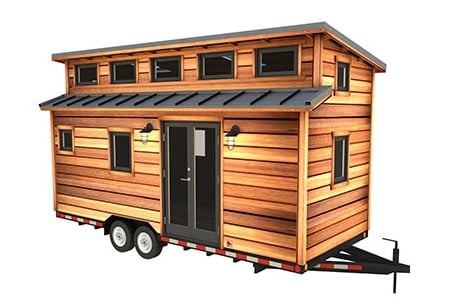 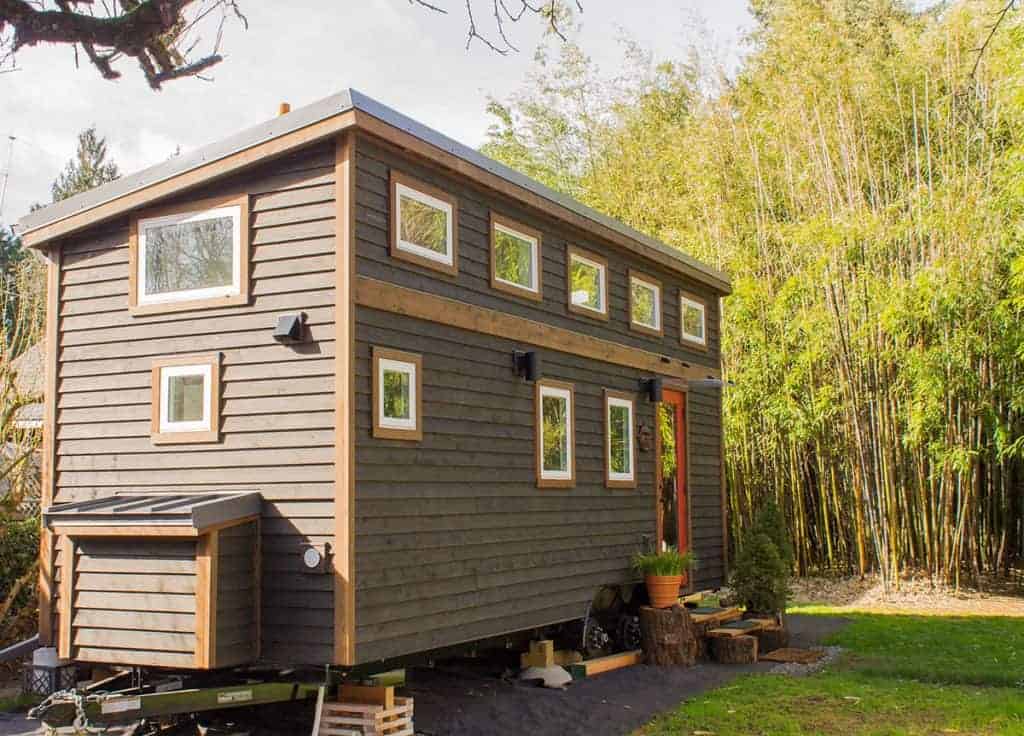 The Hikari Box is a modern retreat or minimalist flat from Portland Alternative Dwellings (PAD) and Shelter Wise. This house offers a spacious and light-filled home with a relatively simple construction process. At 24 feet long, it has 184 square feet on the ground floor, with one 79 square foot loft for a queen bed and one 23 square foot loft for storage or a twin bed. Fourteen windows and two skylights give the house its name — hikari is Japanese for “light-filled” — and make the house bright and sunny without sacrificing energy efficiency. This set of plans includes:

Also, check out TinyHousePlans.com for the best tiny house plans all in one place!