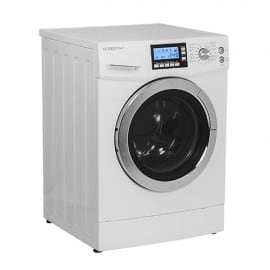 When it comes to ideal use of my time, I think the last place I'd want to spend half a day is at the laundromat. That's why we at the Tiny Project decided to squeeze a combo washer/dryer unit into our tiny house floorplans. I've talked before about tiny house laundry options, but now I'd like to go into more detail about the specific washer/dryer combo that we've now been using for almost a year: the Edgestar 2.0 Cu. Ft. FastDry Ventless Washer Dryer Combo (CWD1510)

This Edgestar unit is more expensive than the cheap and/or manual washing options I've listed here, but it's far less expensive than the LG option we considered. The deciding factor was price. It was hard to justify spending almost $600 more for the LG, when the benefits were only marginal. That was our reasoning, anyway. The Haier combo unit was quite poorly reviewed, so we quickly crossed that one off the list. And we wanted something we could "set and forget" so the manual washing options (and the very , very small loads) were not gonna cut it, even though they provide a nice, cheap alternative.

Here's what we like about the Ventless Edgestar Combo:

Here's what we're not so excited about:

I'd like to start by saying that on the whole, I'm very happy with the way this washes and dries. It gets clothing clean, like any other washer. Drying is not perfect. Dry time is long (like all other combo units, including the LG), and often needs some extra dry time added to really get the clothes dry. But there are trade-offs no matter how you look at it, and for the price and because it's a ventless unit, all-in-all it does a good job.

Ventless drying means unlike a normal drying machine, this unit does not use forced hot air to dry and does not need to be vented to the outdoors. It's a unit designed to be set up in an apartment or other smaller space where installing a full-size, vented unit is not possible. As far as I know, all washer/dryer combo units work like this. A standalone, vented dryer is the only thing that will have significantly better drying performance.

For this model, drying effectiveness depends a lot on how full the unit is. It has a larger washing capacity than drying capacity, so to really get clothes to dry with one cycle (and maybe a 50min add-on dry), you might need to remove a few of the bulkier items from the wash before starting a separate dry cycle.

So it works pretty well and cost is not terrible. But that's not the end of the story. Just recently (after less than a year of use) the unit stopped in the middle of a cycle and would not drain. I could not tell at first what the problem was, but there was no way to get the water out of the unit, no matter what cycle I set it was set to. It would show and "Error 30" code when I tried to start a cycle, indicating that water would not drain - duh!

With no way to drain the unit inside, I had no choice but to disconnect the water and drag the whole thing (all 150 lbs of it) outside on to our deck, so I could open up the "coin trap" and get the water out!

I called Edgestar support. Even though I had been using it for less than a year, I had purchased it more than a year ago, so it turns out the warranty had already expired. I understand why they need to use the purchase date (there is no easy way for users to prove when the actually started using it), but I still felt it was pretty lame for the warranty to last far less than a year as far as actual usage was concerned. Not under warranty, they were helpful, and gave me a reference for a service company -- though I would have to pay out of pocket to have it fixed.

I tried calling around to some local appliance repair companies, but none of them would work on it. Most people weren't familiar with washer/dryer combo units (or the Edgestar brand), so they would not help. However, the repair company Edgestar suggested (A&E Factory Service), allowed me to make an appointment online, charging a non-refundable $79 fee to diagnose the unit.

Meanwhile I had already drained out the water outdoors, tipped the whole thing over, taken off the bottom cover, exposed the pump and drain pipe and did what I could to check for anything that seemed broken. The drain pipe was clear, the coin trap was clear -- nothing was in there that could have been blocking it up.

A few days later the A&E guy showed up and within 15 minutes he had determined that the pump needed to be replaced. Less than a year of use and already a bad pump! He tested it, and although the pump was spinning, the the shaft was stripped and just a small amount of pressure would stop it.

He looked up the part and quoted me $200 for a replacement, plus $150 for the labor (minus the $79 already paid). I said no thank you (knowing I could find the part online for cheaper and replace it easily myself). It turned out the part was not so easy to find. This washer (and the same model sold by other brands) is apparently made by Sears and they are the only ones who sell the part. It was still far more expensive than it seemed it should be ($130), but better than $200. Ordered it online. Got it a week later. 5 minutes after that, with only 3 screws needed to replace the pump, it was good as new!

So all-in-all the repair costs me just over $200. Not a disaster, but not great after less than a year of use.

Would I buy it again? Probably. Even with the $200 repair, it is still far less expensive than the LG model. Granted the LG may not have as many problems as this brand, and it could last longer -- that is yet to be determined. I've heard mixed reviews about the LG as well - none of these combo units are perfect. If you have the cash, you might go all out and get the LG. But those on a budget should still consider this a very good option.