It's been a long journey. As usual, the full days of packing, moving (towing, ugh), and now preparing our spot to park the house has all pushed blogging to the back-seat for a while. But I wanted to write a quick update. 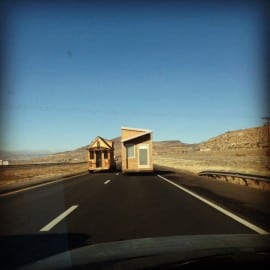 Passed by a Tumbleweed

Before I forget, here's visual proof of tiny homes taking over the world. We were passed by a Tumbleweed home somewhere in New Mexico or Arizona. Totally crazy event and so happy Ani was quick enough with the phone-cam to capture it!

As you may know from my last post, the first half of our journey out West was delayed by a snow storm in Texas. After that it got better, but also a lot worse. Better because the few days of driving through Albuquerque and Flagstaff were relatively uneventful, and we made good time. We found pretty nice RV parks to stay in along the way, including a nicely wooded and full-featured KAO in Flagstaff. Through the desert in California was pretty easy too, though some of the really long uphill sections on I-40 through the desert were actually harder on the truck than any of the higher elevation passes in New Mexico or Arizona. 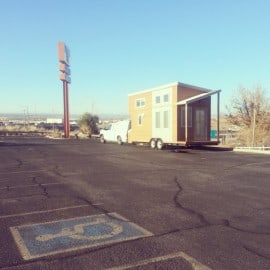 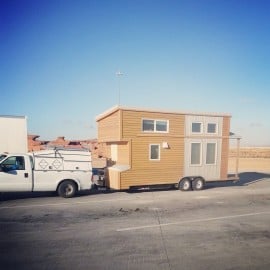 between Albuquerque and Flagstaff 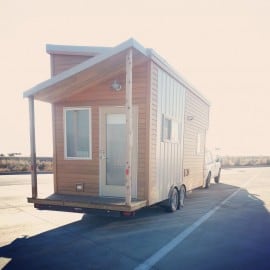 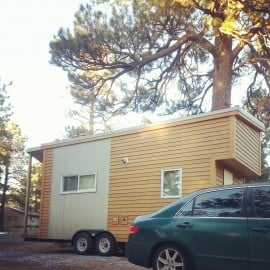 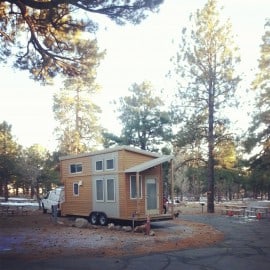 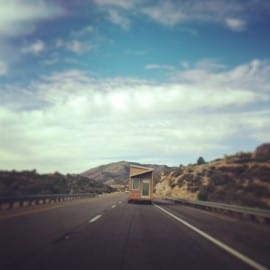 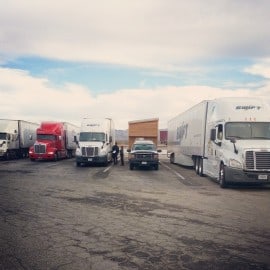 She wants to be a real truck 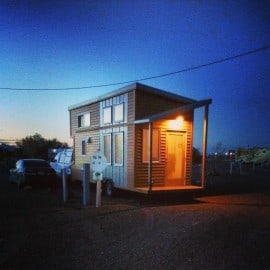 Somewhere in the Mojave desert 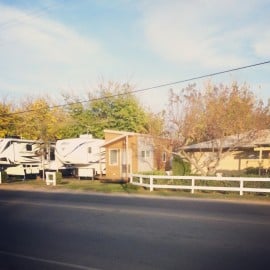 All went well until we made it into California's Central Valley, at which point--just a day before our final destination--the truck decided to protest its week long towing duty by blowing a spark plug. 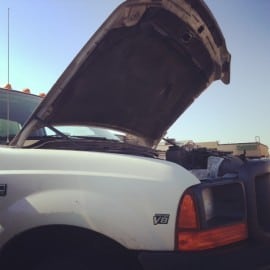 So we had no choice but to pull over in Modesto (our "Hell", as it turns out). After calling AAA for towing, we were very fortunate to find a repair shop able to complete the repairs by the next morning, so we only lost half a days drive, instead of being stuck there until the next Monday. Thank goodness for that.

While the truck was at the shop being fixed, we rented a Uhaul to tow the house to a safer spot at our hotel. But the bumper was too wide and trailer hitch too close to the body of the truck, that we didn't have enough turning radius to even get the house out of the parking lot without smashing a big hole in the house with the corner of the truck bumper. So we just waited for the truck to be repaired. They didn't even need Saturday morning to finish the repairs, and by 5:30 Friday we were feeling good and ready to be on our way the next morning.

Why do we consider Modesto "Hell?" The truck had been repaired quickly, hadn't it? Well, the next morning, I left our room to take Anya out to pee, when I noticed the rear door on the topper hanging wide open, with a few things strewn about the back of the truck. That night when parked in a a reasonably well-lit parking lot at our Days Inn, my Bianchi bike, a digital camera, a few old credit cards, a bluetooth headset and some miscellaneous computer stuff was all stolen. Everything hidden and secured in a windowless topper, but the lock had begun to fail, so it could only half lock -- we had no choice but to take a slight risk, even though the hotel made it clear that pretty much anywhere in the Central Valley was a bad place to leave anything of value in a car, even in the not-at-all-sketchy area we were in.

I do have to say that in a way we were lucky. Anjali's less-valuable bike was not taken, and neither were all of the other storage boxes and items in the truck. Yes, I spent each stop on next day's journey having to cancel credit cards and try to imagine what all might have been taken. But the house was not touched, and in the end, all that was taken could be replaced.

Enough of all that -- too many boring details anyway. 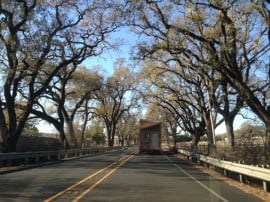 On to the exciting part. We arrived in Sebastopol the next day! We met our hosts (They are the most kind, generous people -- more than we could have asked for). But it was immediately clear that there were some huge potential issues in getting our house parked in the back of their property. Trees hanging over the driveway had to be pruned back for us to even get the house off the street, and the less than 90 degree turn into their driveway itself was literally within inches of being too tight to fit. Luckily I had learned a thing or two towing the house for over a week, that was I pretty confident maneuvering it into pretty scary situation such as this. Either that or I was so exhausted and out-of-wach from the long trip that I was unable to recognize how crazy this all was. And that was just the driveway.

Once we could temporarily park in the driveway, the real work began. Though I was desperate to get back to work after already taken weeks off, I spent the next several afternoons moving a huge pile of concrete pavers (hundreds of them), and a massive pile of every shape and size of scrap wood imaginable. Even with that cleared out, it turned out the path around the side of their house was too narrow to for the tiny house to fit through. So next we had to move tons of camping gear and stored items out of a shed and dismantle the entire shed. Oh, did I mention the trees. All along the path back to our hiding spot in the back, almost every tree had to be trimmed back, some by a LOT, in order to create a wide enough and tall enough gap for the house to fit through. Luckily a neighbor happened to be a tree trimmer, so we hired him to help with that.

Sorry for the lack of photos here, but I think our hosts have some of the tighter squeezes and crazier situations, all which I can add later.

It was a lot of work, and on more than one occasion we thought we'd fail and have to start over in our search for a place to live, but we did it. There were spots where the house came withing inches (sometime touching, yes making actual physical contact) with the roof of the big house, another shed, some large tree limbs -- but it somehow cleared them all. There was also a stunt where Ani had to climb on top of the truck and as we were pulling the tiny house forward, used a broom to push up some hanging phone and power lines, in order for the house to fit under. But alas, we made it. Here she is, at home. 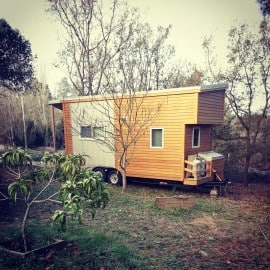 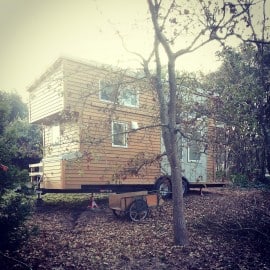 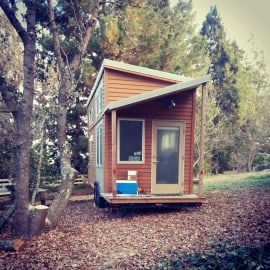 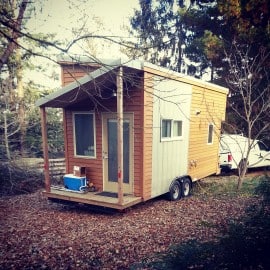 Time to build a proper compost pile and a small fenced area for our dear dog, Anya!