Learn how to get sponsorship for your tiny house

I want to share with you all an amazing resource for gaining tiny house sponsorship, written by my friend, Andrew Odom.

(scroll down to the bottom of the Tiny r(E)voliution store to find it). 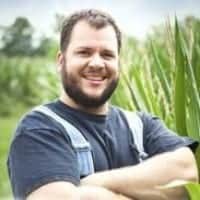 In 2014 Andrew Odom of Tiny r(E)volution was answering questions daily about how he approached sponsorships and how he had managed to get so many sponsors on board of both his personal build and some project builds he had been working on.

While he had been answering the questions faithfully he was also working on a book, almost a manual, if you will, that would define everything he had learned since 2009.

From cold calls aimed at companies to actual snail mail campaigns, he wrote in detail what helped build Tiny r(E)volution into such a successful venture.

But as the years went by the information in that book became a bit stale and completely out-dated. Crowd funding sites like Indiegogo and Kickstarter became more interesting to project managers because they involved less commitment on the part of companies and actually required less work in cultivating relationships with business. It was easy money, as they say.

But Odom saw it differently and realized that while the tide had shifted, there were still companies that wanted help in breaking into the tiny house market. There were excellent services and products that were deserving of attention that they just didn’t know how to get. 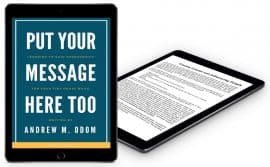 So Odom sat down again - in mid 2016 - to write a volume 2, updating the original book. Gone were the snail mail letters. Gone were the cold calls. In their place came email templates, marketing packets, and social media strategies.

New case studies were sought out and Odom himself asked more questions than before. What do companies want these days? What can they not do themselves that would require the help of someone like me? Do companies still sponsor projects? What is the language they speak?

From those changes and those questions came PUT YOUR MESSAGE HERE TOO, a 60-page eBook, that grants exclusive access to the world of corporate sponsorships and partnerships with tiny housers and builders.

(scroll down to the bottom of the Tiny r(E)voliution store to find it).