Viewpoints: The Tiny House Movement is NOT About Cheap Houses 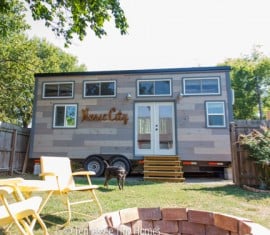 Today I read a blog post by a fellow tiny houser that really hit home with me . We all have different reasons for going tiny, but for me, this author's comments were SPOT ON! I feel the same way but have yet to say it as clearly. I knew I had to share. I know this my upset a few people, but when I think of MY reasoning behind building a tiny house and MY life goals, I have to agree:

The Tiny House Movement is NOT About Cheap Houses

In this great blog post, the owners of the Music City Tiny House state clearly their motivation for going tiny:

We were looking for financial freedom, a more simplistic and less consumeristic lifestyle, but we weren’t looking for a $5,000 dwelling or even a $20,000 one. We knew that if a tiny house were going to work for us we were going to have to love being in it and for us, that meant a kitchen we could cook in with upgraded appliances, tons of upgraded windows to keep the heating/cooling inside while letting the light and “space” of the outside in...and a construction that would last our lifetime. We also knew that we weren’t going to be able to build it ourselves so we were going to have to pay for someone else’s’ time and experience.

When planning my own home, I had the same line of thinking...

When hit with the question, "If you’re paying more than $15k-$20k for a tiny house, you don’t need a tiny house and should just put a down-payment on a big house," here was there response:

Sure, we had the ability to access a large chunk of cash in the immediate to build our tiny house, but the goal was to learn to live a more simplified life now so that we were financially more stable later down the road. Sinking that money into a big house would have done nothing to facilitate that PLUS it wouldn’t have addressed the other reason we went tiny, and that was to be an advocate for the entire movement!...We decided that even if we couldn’t live in our tiny house right away, we could use it to spread the word about the tiny house movement. Exposure and education was the key to changing regulations and giving the tiny house movement the foot-in-the-door it needed to be legal so that the people who did truly need dwelling options that were more affordable would have access to them.

For more of their viewpoint, view the full post: "For the Record: The Tiny House Movement is NOT About Cheap Houses."

Our situation is slightly different in that we DO live in our tiny house full-time. But the goal and desire to push forward the acceptance of the tiny house movement as a whole really resonated with me.

My favorite part, the conclusion they come to, is simple, yet hard for some to grasp:

The tiny house world is a mixed bag. Sure, some people just want a very cheap home. But many to do not, and it takes those people too -- lots of them -- to make this work for all of us!. I don't want to get into too much detail here, but this is why I also disagree with some people's push to making tiny houses the next solution to affordable housing for the homeless. That is a great cause, but not necessarily the color to use when painting the future of the movement as a whole.

More to come on this topic later...

Thank you John and Sarah Murphy for sharing your viewpoint on tiny living! It's always encouraging to hear others with the similar motivations!

For more of their viewpoint, view the Murphy's full post: "For the Record: The Tiny House Movement is NOT About Cheap Houses."

One comment on “Viewpoints: The Tiny House Movement is NOT About Cheap Houses”