It's been two years in the making, but Small is Beautiful: A Tiny House Documentary is finally here! 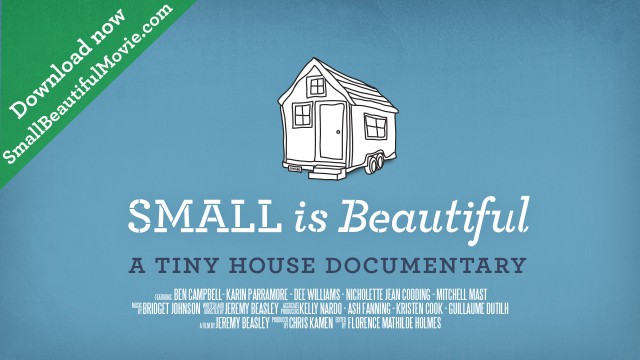 This isn't the first documentary on Tiny Houses, but it's definitely unique. Here's what Jeremy Beasley, the director, had to say:

I wasn't aiming to glorify tiny house living. I explored what it is really like to build and live in a tiny house, sharing the subjects struggle and triumphs - and their real life journey through it.  I wanted the film to go deeper than trends or aesthetic. I wanted it to be courageous and vulnerable. To explore the real human aspect living tiny."

We were very fortunate to pre-screen the film and also to view it with a large crowd at the Tiny House Conference last weekend in Portland. Anjali and I both LOVED it! You can read our review here.

What inspired you to make the movie?

"The idea of having a 30 year mortgage is not something I'm comfortable with, so I started researching alternative ways to live. How could I live with less material possessions, in a smaller space and I thought what better way to learn about it than to interview the people in the process or already doing it. I started making a few short films of people living in shipping container houses and on boat houses and eventually ended up in Portland, Oregon where the Tiny House community is incredibly strong and offered a really deep, beautiful and inspiring look into tiny houses."

"I thought I’d make the film as a way to research tiny houses for myself so I could build one. I thought I’d be done in 3 months, and just pop up a video on my website. Now nearly two years later, I’ve spent all of my savings, had dozens and dozens of people help make the film and it’s become so much more than I could have every hoped for!

It definitely wasn't easy to make the film, for 8 weeks, some very kind friends of mine let me stay in there backyard while we finished editing the film. In the backyard, I lived in a swag (a swag, for those who don’t know is a canvas tent/sleeping bag type thing). It's not a tiny house, but it's definitely Tiny Living!"

How can people watch the film?

Small is Beautiful: A Tiny House documentary is available worldwide for download (which you get to keep forever) for $9.99 via SmallBeautifulMovie.com

There is loads of bonus content in different packages there with hours of great info and footage that we couldn't fit in the film as well. If you love tiny houses, the deluxe edition of the film is the best option.

Small is Beautiful is also available on iTunes, Vimeo on Demand, Amazon Instant and Google Play.

Watch it on iTunes here: https://bit.ly/SmallBeautifulMovieiTunes

The Super Mega Awesome Deluxe edition has over 230 mins of video (that’s nearly 4 hours!) and it includes all the never before seen interviews and footage. There’s SO much good stuff in there. All the bits we love, but didn’t fit the story we wanted to tell in the film.